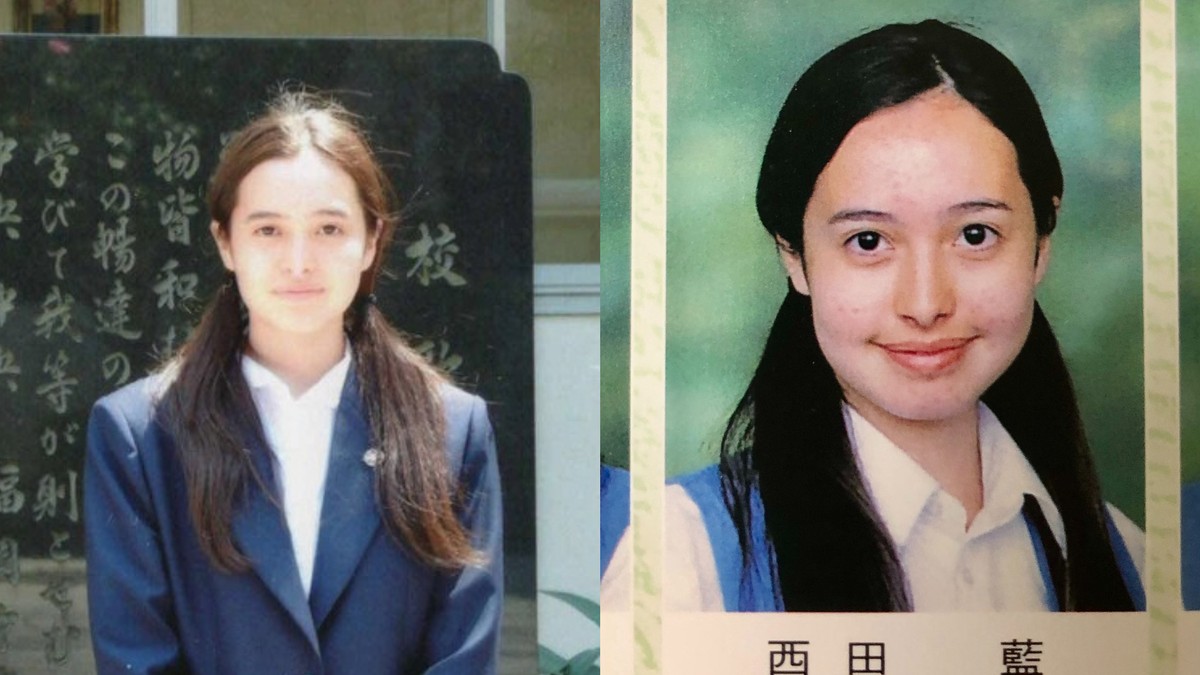 Ai Nishida’s hair is naturally brown (left), but her hair has been altered to appear black in her school yearbook (right). Photo: Courtesy of Ai Nishida

Ai Nishida had never been punished for her brown hair before.

Like many other schools in Japan, her college required all students to have black hair. But after telling her teachers about her mixed heritage, she was exempt from this rule. Plus, she thought, she looked like a mixed Japanese and white girl, so teachers were unlikely to forget that her lighter hair color was natural.

But when she received her college directory just days after graduating, she was shocked to see that her photo had been altered. Nishida’s hair was painted black, a thick plaque smeared over her locks. For the first time, she felt someone telling her she looked bad. She called the school‘s actions “racist”.

Nishida’s experience is one of many other cases of students penalized by the long-standing strict rules of Japanese schools. But in recent years, activists and graduates have called for an end to draconian rules known as buraku kousoku, lest they hamper the diversity and individual freedom of students.

A high-profile case involving a student in Osaka sparked the current national debate over Japanese rules. In October 2017, a high school student sued her school for mental distress after her institution repeatedly asked her to dye her naturally brown hair black. Although she first obeyed the institution’s rules, she eventually stopped, which led the school to verify her roots, remove her desk from the classroom, and clear her name from their names. lists.

His case prompted the formation of advocacy groups, such as Buraku Kousoku, a non-governmental agency that collects information about draconian school rules. The group filed a petition and called for reform of the national education system.

In February, the Osaka District Court ordered the local government to pay the high school student $ 3,100 for emotional damage. However, he ruled that the school had the right to impose regulations on the hair.

Nishida said that with the growing national discussion and increasing reporting on buraku kousoku, she felt motivated to speak out about her experience, which occurred in 2007.

Just in February, the Fukuoka Prefecture Bar, where his college is located, gathered and released official data demonstrating how strict the school rules were.

According to a survey in Fukuoka City, the Bar Association found that 57 out of 69 municipal high schools had rules on the color and pattern of students’ underwear. In some institutions, if a student disobeyed these regulations, they had to take off their underwear and guardians were informed of their actions.

Although Nishida’s experiences in college took place years ago, she was stunned to learn that students were still penalized this way. â€œI asked myself, ‘How often does this happen? Is that even allowed? ‘ That’s why I felt I had to share my experiences on social media, â€she told VICE World News. Now 29, Nishida works as a freelance model and writer.

At the time, she didn’t tell anyone other than her mom about her edited yearbook photo. The graduates received their yearbooks a few days after their graduation ceremony. Nishida therefore felt that it was pointless to challenge an institution to which she would never return.

â€œI also remember everyone getting so excited to receive their directories that they just started exchanging and signing them. I didn’t have time to process what I had just seen in this frenzy, â€she said.

When Nishida brought the phone book home, her mother was furious to discover that her daughter’s photo had been tampered with. She called the school, Maizuru Middle School, a few days later, demanding an explanation. Nishida only learned about this recently.

â€œThey confessed to my mother that they had retouched the photo. They didn’t apologize for their actions and didn’t feel like they had done something wrong, â€Nishida said.

In a telephone interview, the current principal of Maizuru secondary school, Nosaka Karuyuki, told VICE World News that it was “unfortunate that she felt this way, but we cannot comment on what happened. passed because the faculty in charge while she was a student has all left. “

The school has since lifted the rules on hair color, although Karuyuki couldn’t provide an exact date when things changed.

The draconian rules in Japanese schools are believed to date back to the 1870s, when the government began regulating education. The 1970s and 1980s saw growing protests against buraku kousoku, as educators imposed increasingly stringent regulations to crack down on violence and bullying in schools. Despite a decline in school-related offenses, most kousoku, including regulations on the color of underwear, clothing, and student love life, remained in place.

Nishida recalled that at her middle school, although certain rules were enforced for both girls and boys, such as banning eyebrows, most were split based on gender.

The boys couldn’t let their hair grow past their ears. The girls had to tie their hair up, using only black or navy rubber bands. Skirts had to drop below their knees, and female students were subjected to random inspections to make sure they followed the rules. They were lined up in the gymnasium and told to kneel; if their skirts did not touch the floor, they were asked to leave the classroom and immediately purchase a new, longer uniform.

Nishida also said that setting straight black hair as the norm and requiring students to submit proof if their hair was naturally a different color or texture was undermining racial diversity. .

â€œIt reinforces the idea that straight black hair, a quintessentially Japanese look, is fair. Everything else was wrong. But that’s what we’re born with, there’s nothing we can do about it, â€she said of her brown hair.

When asked why these rules exist and still apply, educators at Maizuru Middle School told students that it was in their own best interests.

â€œThey were like, ‘You don’t want to stand out and have all eyes on you to look different, do you?’ We were told we would be the losers for holding on. Many of us did as we were told because if you didn’t you would be asked to leave the classroom and that meant missing your education, â€Nishida said.

With a Japanese mother and an American father, Nishida realized that she looked unconventional.

In middle school, the boys called her gaijin (foreigner) to provoke her. She was using her father’s white last name at the time, and no one made fun of having a last name written in katakana (alphabet for foreign and borrowed words). Among the girls, she was called cute, admired for her brown hair and large eyes.

â€œI feel like my MÃ©tis identity invites people to ask me really personal questions. They were asking how my parents met, or what my household was like. It’s not something you normally find out about when you first meet someone, â€she said.

Stereotypes about half-breeds also made Nishida feel like she couldn’t meet people’s expectations.

â€œBecause I’m mixed, people would assume that I speak English or that I’m athletic and my family is wealthy. But it never was. I don’t speak English, I’m horrible at sports and my mom is a single mom – we were really poor, â€she said.

Such draconian school rules and harsh learning environments caused her to drop out of high school, according to Nishida.

The overwhelming amount of class and the stress of trying to follow every minute of the rule led her to sink into depression. But despite feeling the school system abandoned her, she admitted that she was more privileged than some.

â€œBeing half white means that I am not racially profiled by the police. My skin has also never been a problem. People walk away when I say buraku kousoku is a human rights issue, but I want to use my privilege to talk about what I’ve been through, â€she said.

“People shouldn’t feel like they were born with the wrong things to be successful in this society.”