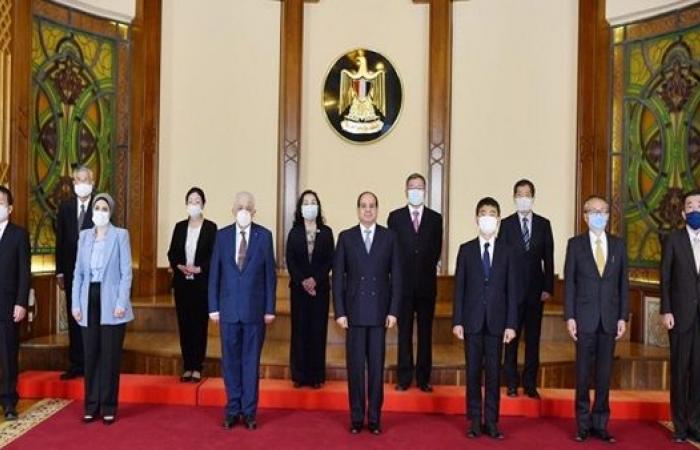 The meeting took place in the presence of the Minister of Education and Technical Education Tarek Shawky, and Nevine Farouk, Supervisor of the Egyptian-Japanese Schools Unit.

During the meeting, the two sides reviewed the efforts of Japanese experts in coordination with the Ministry of Education and Technical Education to establish the school administration rules followed in Japan. These efforts have also served to implement the Japanese education system, an integral part of which is â€œtokatsuâ€, throughout Egypt.

Al-Sisi also praised the Japanese experts for their work in this vital national project which is part of the state’s strategy to train Egyptian citizens. He stressed that the strategy includes the introduction of a comprehensive education system that balances academic aspects and the development of the student’s ability to think and innovate on their own.

The president spoke with Japanese experts to learn about their experience in Egypt since starting their work in the country, overseeing administration in Egyptian-Japanese schools.

Experts said the periodic performance reviews reflected the successful launch of the new system and the establishment of the basic principles of Japanese education in schools in Egypt.

They also expressed their honor to meet President Al-Sisi and underlined their concern to consolidate the foundations of the Japanese education system in Egypt.

This includes the process of teacher training and the development of educational programs in coordination with the Egyptian Ministry of Education and Technical Education.

Experts further praised the seriousness of the Egyptian government in developing the country’s education system to the highest standards.

Meanwhile, they praised the level of Egyptian teachers working in the Egyptian-Japanese school system and their ability to understand the concept and principles of the Japanese education system.

The meeting provided an opportunity to review the various activities implemented in Egyptian-Japanese schools within the framework of the â€œtokatsuâ€ system.

Egypt is the first country in the world to adopt this system after Japan. It is based on the preparation of an integrated approach to develop children’s personality from the start and their acquisition of positive values, behaviors, skills and habits.

The most notable are: taking responsibility; cleanliness; order; commitment; independence; and problem solving, among other qualities that grow and integrate over successive school years.