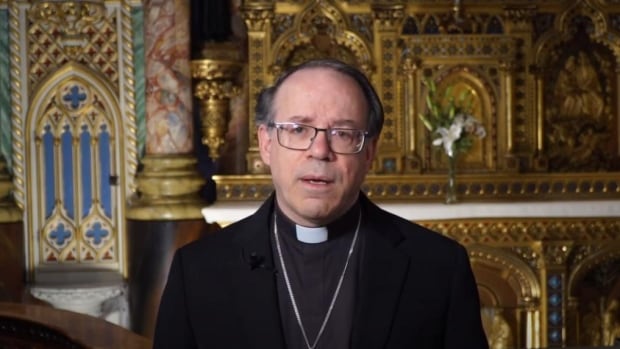 WARNING: This story contains details that some readers may find distressing.

The Archbishop of Ottawa-Cornwall, Marcel Damphousse, on Monday issued a formal apology to Indigenous peoples for the role of the Catholic Church in the residential school system.

He also called on Pope Francis, the world leader of the church of about 1.3 billion people, to apologize as well.

The apology is the last expression of contrition from a Canadian Catholic leader since the The Tk’emlúps te Secwépemc First Nation announced the discovery of what are believed to be the unmarked burial grounds of children’s remains adjacent to a former residential school in Kamloops, British Columbia. Vancouver and Regina.

We have sinned against our brothers and sisters in our care.– Bishop Marcel Damphousse

Over 150,000 Aboriginal children were separated from their families and forced to attend residential schools across Canada between the 1880s and 1996, and many suffered physical, sexual and psychological abuse. Most of the schools were run by Catholic denominations on behalf of the federal government.

“I sincerely apologize for the involvement of the Catholic Church in the residential school system and pray for healing as the Church in Canada walks the path of reconciliation with the Indigenous peoples of our community,” said Damphousse said in a video posted on the Archdiocese’s YouTube channel site on the occasion of National Indigenous Peoples Day.

“I add my voice to those who ask the Holy Father for an apology to the indigenous peoples.”

In the video, Damphousse said the discovery of Kamloops inspired him to read, listen and learn more about the impact of the residential school system on Indigenous peoples.

“The stories we have heard both in the Truth and Reconciliation report and more recently over the past few weeks about the experience of many Aboriginal residential school students were shameful,” said Damphousse.

“As a church, we have not only failed to be genuine witnesses of the goodness of Jesus Christ, but we have sinned against our brothers and sisters in our charge.”

Evelyn Korkmaz was forced to attend St. Anne’s Residential School which was run by the Catholic Church in Fort Albany, Ontario. She said Damphousse needs to learn more about the residential school system first.

“How can you have a sincere apology if you don’t even know what you’re apologizing for?” “

In a CBC radio interview Ottawa morning earlier this month, Damphousse admitted he knew little about the history or legacy of residential schools, a comment that drew criticism from former TRC commissioner Marie Wilson, who said that the commission specifically called on churches to educate their members about their role in this chapter of history.

Damphousse said he had since contacted the Kateri Indigenous Ministry of Ottawa, a church on Bronson Avenue named after Saint Kateri Tekakwitha, the first North American Indigenous person to be a saint.

Damphousse said he had “asked for help” to find out how he could best support the local indigenous community.

“I have listened to the requests for concrete actions that we can take, including the participation and promotion of listening encounters with the indigenous peoples of our archdiocese, working with indigenous peoples to provide education to our clergy and to our parishioners facilitated by indigenous peoples, ”said Damphousse.

Korkmaz said the apology would not go far enough and wanted Damphousse to urge the Vatican to release the documents relating to the residential schools.

“It’s a start to recognize the wrongs (…) that the church has done to our people or to myself, but after the apologies, we need concrete action,” she said. declared.

Evelyn Korkmaz, who was forced to attend St. Anne’s boarding school, said Catholic Archbishop Marcel Damphousse’s apologies must be followed by action and asked the church to release documents related to the operation of the schools. 0:47

Francois has called for healing, but did not apologize for the role of the Catholic Church in running schools, even after Prime Minister Justin Trudeau personally asked him to consider such a move during a visit to the Vatican in 2018. A papal apology was one of 94 recommendations made by the TRC.

In a speech in St. Peter’s Square earlier this month, Francis said he was saddened by the discovery of Kamloops and called for respect for the rights and culture of indigenous peoples.

Support is available for anyone affected by their residential school experience and for those triggered by the latest reports.

A national residential school crisis line has been established to provide support to former students and those affected. People can access emotional and crisis referral services by calling the 24-hour National Crisis Line: 1-866-925-4419.