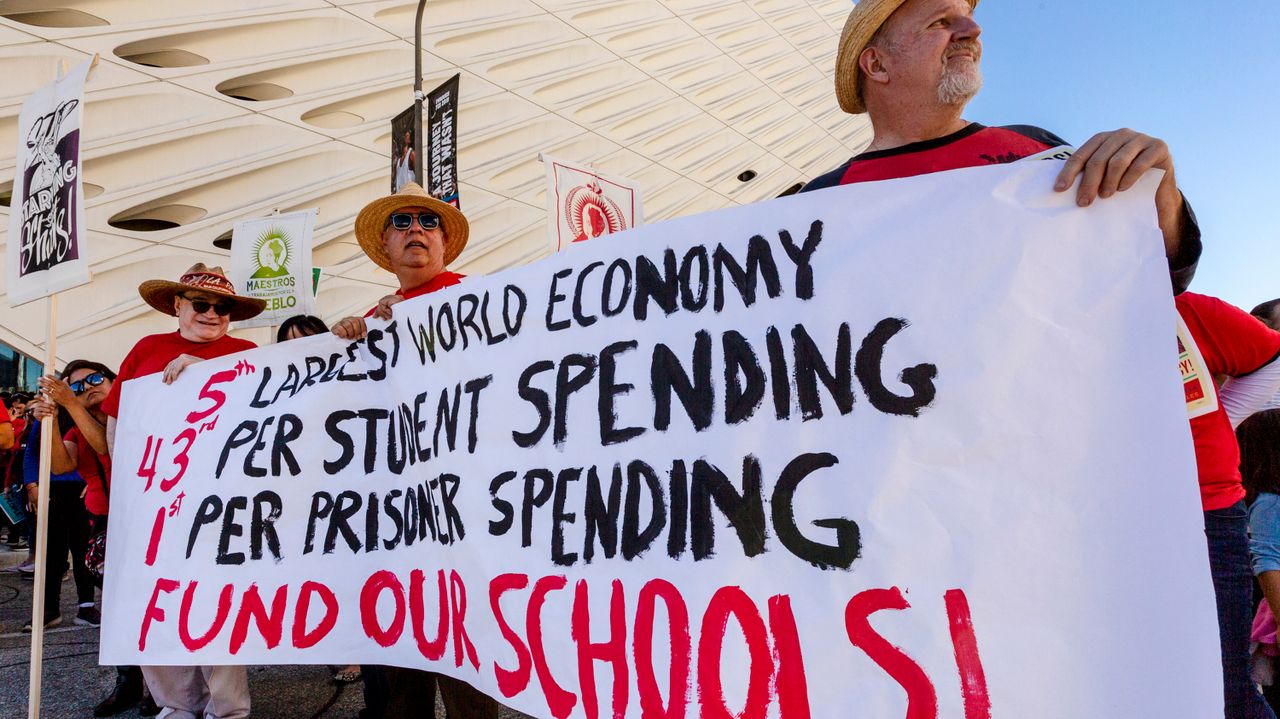 California faces a massive shortage of 50,000 teachers for the 2022-23 school year. After more than a decade of budget cuts and the promotion of charter schools, educators are experiencing a steep decline in salaries and conditions, leading thousands to leave the profession or relocate for more affordable living conditions. In the 2020-2021 school year, the total number of full-time equivalent teachers in the state was 274,759. Of that number, 46,434 teachers were either uncertified or certified in a subject other than the they taught.

Children with special needs are the first victims of this deficit. In the 2020-2021 school year, 28,985 teachers were authorized to teach people with disabilities, but the majority needed exemptions to teach. Only 43.5% had preliminary and clear qualifications, which require a minimum of 5 years of experience, basic skills and teaching training. Only 52.1% of teachers for students with hearing or visual impairments were fully accredited.

One of the largest school districts in the state, Oakland Unified, had nearly a third of its classes taught by teachers without full certification. California has filled the void with limited permits, such as provisional internships, short-term staff, variable duration waivers and replacement permits. These grant schools exemptions from state accreditation requirements.

Substitute teachers are also scarce, and the state has turned to hiring unqualified teachers. In Sacramento, where teachers went on strike in March over low pay and understaffing, about a quarter of students did not have a permanent teacher. The lack of substitute teachers meant that on any given day nearly 3,000 students in the district didn’t even have an adult for their class and had to sit with other classes without teachers in the cafeteria or auditorium. of their school.

The COVID-19 pandemic has been particularly painful for teachers. The Democratic Party-controlled state Legislature, Governor Gavin Newsom and State Superintendent of Public Instruction Tony Thurmond, with the encouragement of teachers’ unions, have recklessly pushed a return to in-person teaching amid the pandemic.

Forced to attend crowded in-person classes without proper personal protective equipment or adequate ventilation, staff as well as students contracted COVID-19, many of which die or develop long COVID. More than 9 million Californians have officially been infected with COVID-19, representing 11% of all cases in the United States, and 9,130 ​​have died, or about 9% of deaths nationwide. Among children, 1,467,721 youngsters up to the age of 17 have been officially infected in the state and 72 have died.

Falling living standards, the stress of the risks of in-person teaching during the pandemic, and long hours (the average teacher in the United States works a 50-hour work week) have combined to cause a significant increase early retirements, out-of-state departures and abandonment of the teaching profession. One in 10 school districts in California has an annual turnover rate of 25% or more.

Across the country, college graduates are turning away from teaching careers because of the atrocious conditions educators face. Even before the pandemic, training programs were experiencing a dramatic drop in enrollment. Between 2011 and 2019, the last year with complete national data, the number of bachelor’s degrees in education fell by more than 21%. The trend has accelerated during the pandemic, with the American Association of Colleges for Teacher Education reporting that one in five institutions saw enrollment declines of 11% or more in 2020 and 2021.

The California Department of Education launched the California Center for Teaching Careers to recruit more teachers, but the shortage is caused by the deliberate policies of the Newsom administration. Rather than improving the school system, the state seeks to dilute its educational standards. Any influx of new teachers will be inexperienced and hired from schools in the deepest state of crisis with the largest vacancies. Many will quickly burn out and quit smoking. For school districts, subs and new recruits are a financial bonus. Both groups earn less and receive fewer benefits than experienced full-time instructors.

The downward spiral accelerated with the “Great Recession” from December 2007 to June 2009. This crisis was triggered by the Federal Reserve turning a blind eye to risky speculation by financial institutions, leading to the mortgage debacle at risk and a crash in stock prices. . The recession has led to budget cuts across the United States, with teacher layoffs and school curriculum cuts.

The National Council on Teacher Quality surveyed 41 school districts nationwide. They concluded that in the four years following the stock market crash, wage increases were one-third to one-half of pre-recession levels. Of the districts surveyed, 80% had a wage freeze or reduction in at least one of those years. Teachers in Long Beach, Southern California, averaged annual salary increases of 1.8% between 2008 and 2012, with inflation rising 2.75% annually for the same period.

California school districts have not recovered, postponing maintenance, laying off staff and closing schools. Today, dozens of districts across the state face financial ruin and a state takeover, which will only lead to more cuts. Teachers’ salaries over the past two years have fallen sharply with an inflation rate of 11.8% for this period. The main teachers’ unions, the National Education Association (NEA) and the American Federation of Teachers (AFT), have refused any strike action against budget cuts, school closures and layoffs.

The only beneficiaries of the recession were Wall Street companies which received $787 billion from the Obama administration. The administration boasted of funds for the construction of schools and preschool programs, subsidies for health care and a tax cut for the middle class. The final stimulus reduced all of that and added $70 billion in tax relief for high-income families. As for the criminals who caused the crash, Goldman Sachs, Bank of America, Citibank, JPMorgan Chase and Morgan Stanley handed out $90 billion in executive compensation and bonuses.

In order to defend their standard of living, massively expand public education, and fight to end the COVID-19 pandemic, educators across California must break with Democrats and rotten labor leadership and join the committee. Educator Safety, which works to unite educators, parents, and students with the broader working class across California and abroad. Fill out the form below to get involved!

I would like to discuss joining or creating a grassroots educator committee:

Punjab School Education Board open school admission has started for 2022-23, read ahead for full details