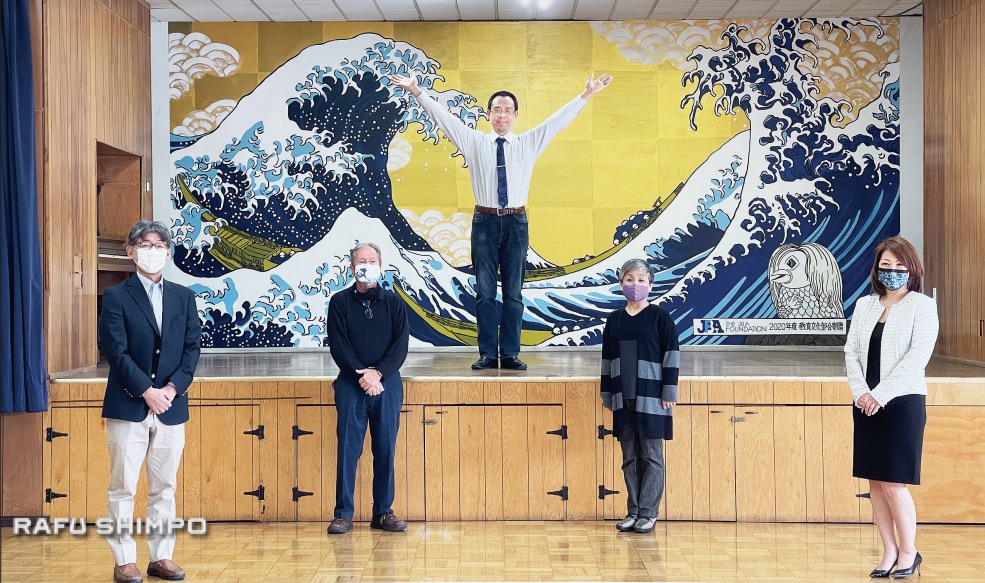 LONG BEACH – One day in late January, despite the stormy weather, an artist worked silently with his brush, all by himself, in the auditorium of the Long Beach Japanese Cultural Center (LBJCC). His name is Shuji Nishimura and the day was his 13e of a two week project.

A mural is painted on the back wall of the stage, approximately 9 x 20 feet. LBJCC won a grant from the Japan Business Association of Southern California (JBA), whose education and culture committee offers Japanese Enrichment Grants (JEG).

Born in 1972 in Hyogo Prefecture, Nishimura arrived in the United States in 1999 and currently lives in South Bay. He continued his art while working as a graphic designer and started creating chalk art in 2007. He went on to win awards in various competitions including the Pasadena Chalk Festival, where artists draw pictures on the streets. . Nishimura focuses on realism, exploring how close he can get to photography with the art of chalk.

For the LBJCC project, using a huge wall as a canvas was not a problem as it often works on large pieces.

Nishimura recreates the famous ukiyo-e “The great wave off Kanagawa” (Kanagawa-oki Nami Ura) by Katsushika Hokusai. Mount Fuji can be seen in the background with small boats caught in the swelling waves. It is Hokusai’s most famous work and represents Japanese culture.

His work began by erasing the existing 25-year-old fuzzy paint. Then, on the white wall, he dynamically draws a big wave higher than his height, and splashes. About two weeks later that day, the project is almost complete. He put the finishing touches on the mural by carefully drawing the name of the sponsoring organization, JBA, and a photo of “Amabie”.

What is Amabie? It is an apparition (yokai) that lives in the sea, according to a legend that has been passed down in Japan for a few hundred years. Amabie has been a relatively unknown monster character. However, since the start of the COVID-19 pandemic last year, she has become popular and idolized in Japan as a talisman to dispel the plague.

With Amabie praying for the end of the century-long pandemic, Hokusai’s mural is nearing completion. The only disappointment is that the center is closed due to a pandemic. There is still time to show the new scene mural to members of the community center.

LBJCC has long contributed to the Japanese American community in Long Beach as a base for learning Japanese language and culture. Due to its proximity to Terminal Island, which flourished as a pre-war Japanese fishing village, many Japanese Americans lived nearby at one time. Although the number is said to have dropped significantly, it still has 300 families as members and more than 100 people gather for the pancake breakfast. In addition to the Japanese language school, there are courses such as kendo, judo, karate, calligraphy, and flower arranging.

The stage usually hosts the speech competition and skit presentations of the students in Japanese, as well as cultural performances for the various summer holidays and festivals. The establishment has been closed since the COVID-19 epidemic. The Japanese language school has been brought online and will continue to do so for some time.

In the midst of so much melancholy, the approval of the grant brought some light to LBJCC.

The Japan Enrichment Grant (JEG) annually contributes to educational institutions and organizations engaged in activities aimed at disseminating Japanese culture, traditions and language. In FY2020, a total of $ 25,000 was donated to ten projects, including a tea ceremony demonstration via Zoom for a high school, a performance of children’s story “Momotaro” for an elementary school , a Japanese cooking experience and the purchase of Japanese musical instruments and books.

Takato Hayashi, the head of JEG, praised the Hokusai project. â€œA wonderful project that allows local people to see and understand Japanese culture and Japanese painting. I was impressed with their appeal in the application process. Such a wonderful concept that the famous Japanese art painting will encourage and energize members of the Cultural Center and the local community. It was perfect.”

He said the project motivated him to agree to support LBJCC.

JEG funds are generated individually by the Education and Culture Committee each year, rather than being allocated by JBA. The committee hosts an annual charity golf event and committee members are enthusiastic about their mission. Funds raised through the golf tournament provide educational support to the local community.

2020 has been life changing with a pandemic no one ever imagined. The committee was concerned about how they might support the community in such circumstances. â€œHowever,â€ said Saya Kawai, 2020 chair of the committee, â€œcontrary to our anxiety, despite the school being closed and all events canceled, new educational ideas arose. We received as many applications as we normally get it in other years. We have been deeply impressed by the educators and teachers who continue to provide learning opportunities for students. It has been a very encouraging year for us.

With the approval of the grant, the board of directors of the LBJCC decided on the final design based on the three photos of Hokusai submitted by Nishimura. â€œOur Board of Directors chose this oneâ€¦ most iconic work,â€ said Jay Shaheen, Chairman of the Board.

On February 13, two weeks after the completion of the mural, a small ceremony took place. A few board members were invited with social distancing in mind. Participants who saw the completed mural for the first time were amazed at the grandeur and power of the work. They look forward to the day the center reopens and the mural will impress even more people.

Shaheen said, â€œWe are lucky that JBA is supporting us. We will definitely be supporting JBA in one way or another, word of mouth they do such a good job. For our community center itself and also for the Japanese language school, this is going to be very valuable. Japanese art gives a good impression to those who come here. All in all, it is beautiful.

Hayashi of JBA said, if the COVID situation continues for some time in 2021, â€œThe mission of the education and culture committee will not change. We will focus on how to operate in this environment, in order to contribute to local communities and share Japanese culture.

Expressing his motivation, Nishimura said, â€œI would like to continue drawing in various forms. I would love to paint on any occasion if the opportunity is given to me, regardless of the location, whether indoors or outdoors.

Nishimura’s amazing works can be seen on his Facebook page. A mural of Nishimura can also be found on the exterior wall of the Art and Fish restaurant, located on Mateo Street in the Los Angeles Arts District, near Little Tokyo.