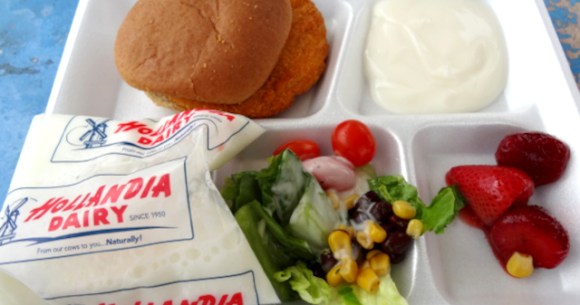 “How I Learned to Stop Worrying and Eat Japanese School Lunches”, by PK Sanjun

A touching story in which our courageous journalist overcame his daily battle with school meals.

One of the requirements for working here at SoraNews24 is the willingness to do and try almost all, especially when it comes food. And when it comes to food challenges, our reporter P. K. Sanjun unafraid of anything the culinary world throws at it, no matter what kind of gastrointestinal havoc is served up to it.

Yes, PK Sanjun is definitely a man who knows how to store a lot of food without any problem, but he has not always been so. In fact, he recently revealed that when he was a young elementary school student, he walked around two hours to finish his school lunch.

Most elementary schools in Japan do not allow students to bring lunch from home. Instead, each child receives exactly the same meal (taking allergies into account, of course). Lunchtime usually lasts about an hour, and those who finish quickly have more time to play outside with their friends.

PK didn’t spend much time outside after lunch because most of the time he was still eating his school lunch after the last bell of the school day rang, around 2:30 a.m.

How come? Was PK getting an incredible amount of food in preparation for his future writing career for SoraNews24?

No. PK’s reason was, very clearly, that he thought his school lunches were disgusting.

▼ With PK munching on monstrosities like pickle burgers, it’s hard to believe he’d find anything disgusting, but there you go.

That’s not to say that all lunches at PK Elementary School were bad. PK’s school was even blessed with an on-site kitchen, which not all schools in Japan have, meaning he could enjoy freshly prepared meals every day. And of course, there were lunches that he really, really enjoyed.

The problem wasn’t that school lunches were bad, it was that the food PK was served at home was just right too good in comparison.

▼ Baby PK and his mum in the kitchen

PK food was served at home and at school didn’t vary hugely, but the way they were cooked was miles apart. The vegetables he was asked to eat were much easier to eat at home than at school. There was just something in his mother’s kitchen that rendered his body unable to accept food from anywhere else. Even though little PK really wanted to go out and play with his friends, he couldn’t help but throw up when he took a bite of his school lunch.

Back when PK Sanjun was an elementary school student about 35 years ago, attitudes were much stricter than today when it comes to leftovers. The unspoken rule was that every part of the school lunch had to be eaten, and leaving something unfinished was considered selfish. What if there was a certain food you didn’t like? Difficult! He went down the hatch, no matter how long it took you to do it.

And so PK was stuck at his desk, working on his lunch, until the last bell for the day rang and he was free to go home.

▼ It should be mentioned that the children were never forced to eat the packaging.

This pattern continued until PK, by this point an enlightened third year student, suddenly unlocked new skills to help him wage war on his school lunch.

Those survival techniques included strategically using milk to help swallow more nasty foods, like wakame seaweed (which PK still hates to this day), swallowing shiitake mushrooms and carrots without chewing them at all, and even hiding certain foods he hated really in his desk or his school bag. Of course, he wasn’t starting to like these foods, but he was solving the problem of having to eat them.

▼ Some foods may have been more difficult to slip into her bag than others.

PK truly broke free from the tyranny of school lunches when he finally became a junior high school student. Her eighth-grade homeroom teacher, MK, was a one-time teacher, rough around the edges and very good at high kicks, even though he wasn’t that tall. He also didn’t like fish, and if fish was on the lunch menu that day, he just left it untouched, even though his students watched him the whole time.

“Why should we eat something we don’t like? It’s normal for people to have food they don’t like. You’re not going to die just because you don’t eat fish,” he said, and he was just as tolerant of his students’ eating habits; something at the time was quite unconventional. Looking back, PK thinks his former homeroom teacher was quite a progressive thinker at the time.

So, in the end, PK was finally free to eat the way he liked. And if there are any young children today struggling to finish their school lunch, PK hopes this story will inspire you to know that nothing is impossible to overcome, no matter how hard it may seem!

Images ©SoraNews24
● Want to be up to date with the latest articles from SoraNews24 as soon as they are published? Follow us on Facebook and Twitter!
[ Read in Japanese ]

INTO warns that the school system is creaking