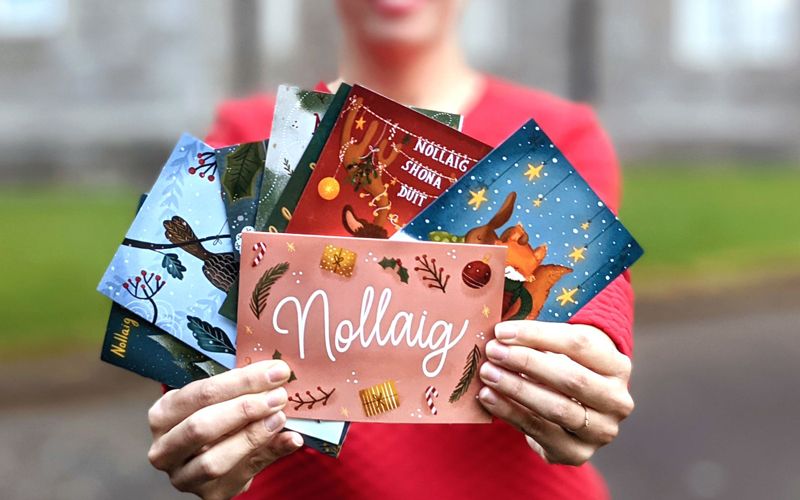 The parents of Gaelscoil Áine in Mobhi Road, Dublin, use specially designed Christmas cards to spread the use of Gaeilge and raise funds for the school.

Krüse has designed a series of Christmas cards (cartaí na nollaig) with Irish greetings which are sold to raise funds for the school.

She said she hoped the cards would help spread the use of the Irish language as well as holiday cheer.

“Irish language Christmas cards are generally hard to come by and I wanted to create a variety that would look cheerful and festive and would suit a wide variety of people,” the artist said.

Krüse, originally from Brazil but living in Dublin for nearly 15 years, is a renowned artist and children’s book illustrator whose work includes the covers of RTÉ Guide Christmas magazine in 2019 and 2020.

His illustrations can also be found in books such as My Little Album of Ireland, Percy Péacóg and the two award-winning Ná Gabh ar Scoil and CD book Bliain na nAmhrán.

“The cards are made to the highest quality standards and feature a cute fox and hare sitting under the stars on a log in the snow sharing a cup of hot chocolate,” she said.

“The cards cover different aspects of Irish culture at Christmas with both traditional and modern elements that look and feel welcoming.

“We’re selling these as a pack of ten cards for €10 to help Gaelscoil Áine raise money for important resources at school, although I also think it’s a sweet way to bring in some extra cash. Irish in people’s lives.”

Gaelscoil Áine opened in September 2019, providing parents with a new coeducational Irish-speaking school that is both multi-denominational and multilingual.

The school is under the patronage of An Foras Patrúnachta, a management body founded in 1993 to promote education through Irish.

The school is temporarily located in the third tier building of Whitehall College on Mobhi Road, Drumcondra, pending a permanent location.

It currently has 70 students with a huge demand for places in the school.

All proceeds from the sale of Gaelscoil Áine cartaí na nollaig will go to the school to fund much-needed educational resources, such as books and sports equipment.

You can buy the cards online from Shop in Ireland or from the Tarsila Kruse website.

Cards will also be sold at the National Botanic Gardens Dublin Outdoor Christmas Craft Market on Saturday 11th and Sunday 12th December from 10am to 4pm.