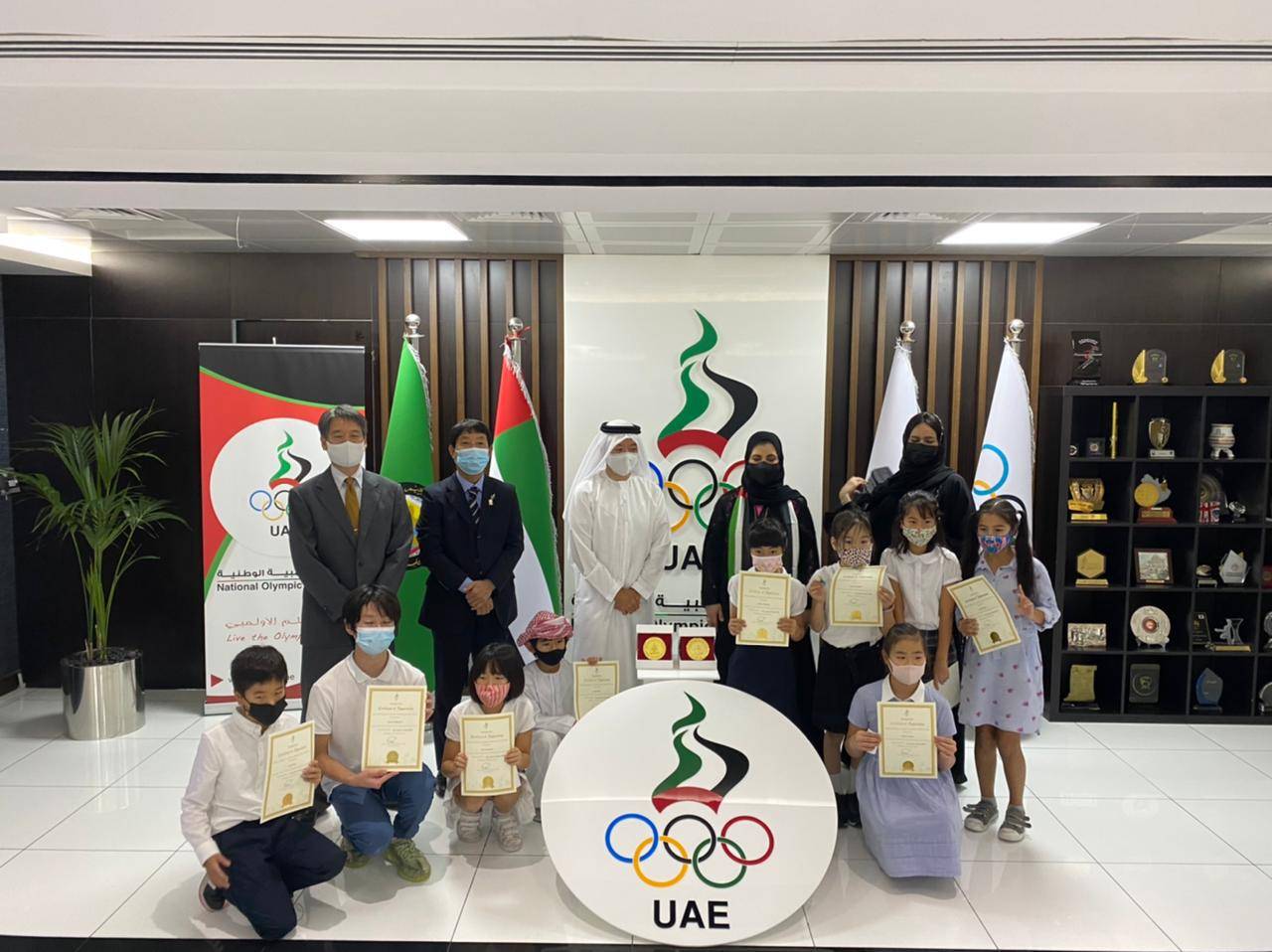 The UAE National Olympic Committee was presented with a silk scarf as part of the UAE-Japan Friendship Project by students from the Japanese School in Dubai.

The presentation ceremony was attended by Ahmad Ibrahim Alblooshi, President of the Technical and Sports Department of the National Olympic Committee (NOC) of the United Arab Emirates; Sekiguchi Noboru, Consul General of Japan in Dubai and the Northern Emirates; Dr Azza bint Suleiman, Deputy Secretary General for Administrative Affairs, NOC; Masao Wada, president of the Japanese school in Dubai; and Masami Ando, â€‹â€‹Director General of the Japan Foreign Trade Organization (JETRO) Dubai; as well as dignitaries and students from the Japanese School in Dubai.

Satisfied with the children’s efforts, Alblooshi said, â€œWe’ve been working on it for a year and a half now to get to this point. I am happy that this collaboration was supported by the top management and all those involved. Students from the Japanese School in Dubai worked hard on this project for the United Arab Emirates Olympic delegation. We are very proud and thank the support of the Japanese government.

Expressing his sincere gratitude, Consul General Noboru: â€œToday we are witnessing great achievement from the next generation of young people, students of the Japanese School in Dubai and others. These scarves which are presented to the NOC are made from the silk of the endemic Japanese silkworms Koishimaru. I am sure the Japanese people would be very happy to know that the United Arab Emirates delegation to the Olympic Games in Tokyo next month will wear these scarves and march in the opening ceremony of the games.

Explaining the above, he continued, â€œFirst, to impart the power of sport to people in Japan and around the world; second, to show Japan’s recovery from the Great Eastern Japan earthquake in 2011; and finally, to present the reconstruction of Japan at the optimum time to overcome the pandemic as well as to meet global challenges.

â€œThe Olympic Games will also remind us of the unity of peoples, and of nations in general, to build peace in the world. We will be able to realize through the games that it is important to make efforts. In addition, I believe that the Tokyo Olympics will be a valuable opportunity for Japan to convey its various appeals, including culture, to the world. Young Japanese people have already achieved these goals thanks to this silk project. They have worked hard to breed the traditional Japanese silkworm with perseverance and the world will surely find allure at the opening ceremony of the Tokyo Olympics through the scarves. I hope this project will help improve our mutual understanding and foster new friendly relations between Japan and UAE.

Fostering bilateral trade relations between UAE and Japan, JETRO was leading this project in UAE. Of the organization, Ando noted: â€œI am personally impressed on this day. We encourage bilateral trade and investment between the two countries. In recent years, the Japanese silk industry has declined. We were approached about this project of making scarves for the NOC delegation and it was implemented with the help of Japanese students and the endemic silkworm. It has become a matter of attention between the two nations. The project is also a good opportunity to promote the Japanese silk trade in the United Arab Emirates. “

He added: â€œI have spoken to Japanese schools in Abu Dhabi and Dubai about the viability of the operation for this project. The response has been positive from students and teachers. It was a tedious project because the silkworm cannot survive in this climate. We made the effort to make this dream project a success. However, this is not the finale, but just the beginning. I think it’s wonderful to be able to collaborate for today’s presentation ceremony.

A remote participant from Japan, Yano, Director of Presentation, Tokyo Olympic Organizing Committee, said: â€œWe are only one month away from the start of the Olympic Games. Preparations are extremely busy as we prepare under strict security measures for the games that will take place during the pandemic. With Expo 2020 Dubai coming after the Tokyo Olympics, I hope the children will continue this project and support the relationships more. “

According to the Japanese Consul General, â€œThis ceremony represents exactly the long-standing friendship between the two nations. The silkworm raised by these schoolchildren is not easy to breed. It is a species of silkworm endemic to Japan. However, their efforts paid off in this climate and they succeeded in obtaining the cocoon and the silk to make the scarves. The students thought about the friendly relations between the two countries and tried to help strengthen the ties. “