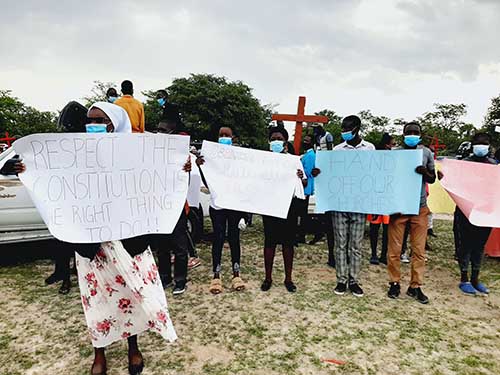 A boy who was denied admission to the Erikki Nghimtina mixed school in Ohangwena region for two years because he belongs to a Pentecostal church, will now start school in grade one this week.

Tangeni Aron stayed at home after the school principal denied him admission because he was baptized in a revival church. On Friday, residents of the Ohangwena area, including self-proclaimed pastor churches, through a protest, expressed their disapproval of the boy’s situation, simply because of his religious status.

The petition, which also related to the treatment of revivalist churches in the region, was delivered to the office of the directorate of education in Ohangwena region.

In an interview with New era, the child’s father, Shilipuleni Venasiu, said he was disappointed with the principal who refused his son’s admission simply because of the child’s religious status.

“I had no peace. I always have sleepless nights because of my child not going to school,” Venasiu said.

He pointed out that he tried to explain to the school principal and begged her to admit his son.

The father said the principal wouldn’t admit the boy because she’s not allowed to admit a child who has a baptism certificate from Revival Church.

Venasiu said he reported the matter to the education director’s office in Ohangwena, but nothing has been done since 2020.

“I have taken the matter to the Christian Freedom Fighter party and also to the various Revival Church pastors to see if they can help my child gain admission,” he said.

Venasiu further explained that this prompted the Christian Freedom Fighter and locals, including various revivalist church pastors, to demonstrate against the unfair treatment of her child.

“Monday morning, I received a call from school saying that I had to take my child to start school this week,” he said.

Venasiu said he was extremely happy that his son was going to school.

Talk to New era, Aron says he is happy because he is going to school to learn how to read, write, calculate and make new friends.

“It’s not okay to stay home while my friends are at school learning various activities,” Aron said. Also speaking to this publication, Deputy Education Minister Faustina Caley said that every Namibian child has the right to go to school regardless of their religious status.

Caley said the department does not have a rule that denies children access based on church membership or religious affiliation.

“Education is the key to every Namibian child, children are the leaders of tomorrow, so it is very important that schools do not deny admission to learners,” she noted.

Letter: Identifying and addressing inherently divisive concepts in our own school system