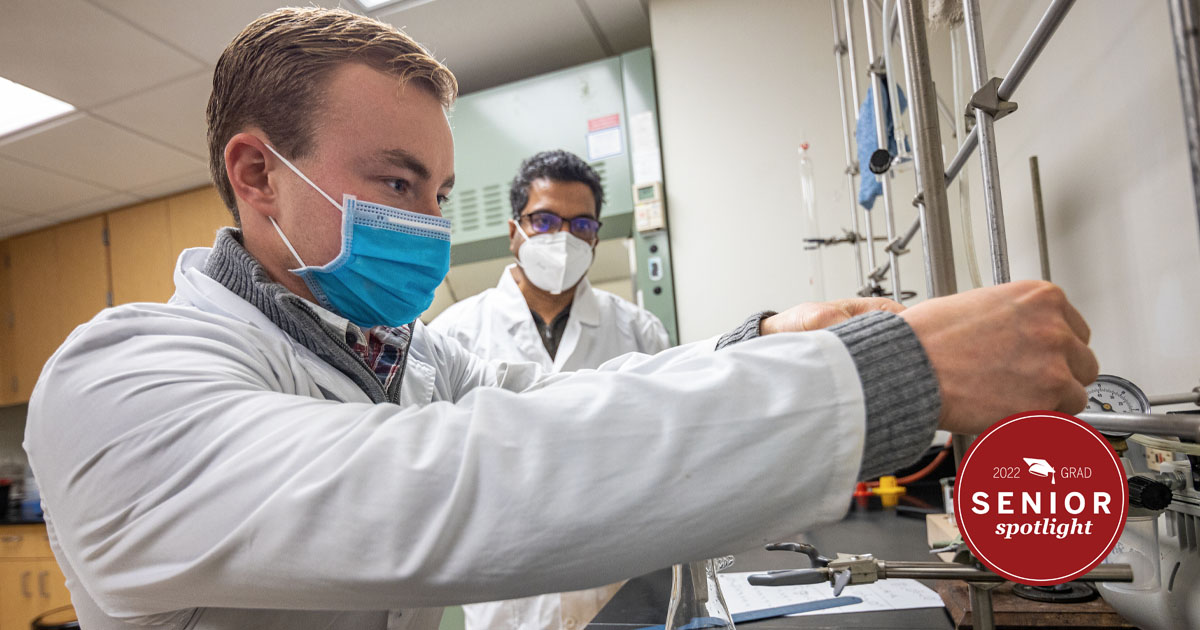 KOKOMO, Indiana – For the past three years, Ross Filbrun has focused on one goal: admission to Indiana University School of Medicine.

He prepared for this goal by working on a degree in biological and physical sciences at IU Kokomo, and also researched the synthesis of compounds for use as chemotherapy agents with Mohammad Hossain, assistant professor of organic chemistry.

In September, his efforts paid off after he was admitted to the school’s Lafayette campus — his first choice.

“It’s probably my biggest achievement I’ve made to date,” Filbrun, of Flora, said. “It’s like going back to a job, like mowing the yard. You look back and say, “Wow, I did something today.” It’s the same feeling, but much bigger. Think 100 times.

One of the most influential parts of his student experience was one-on-one research with Hossain, beginning in the summer of 2021. Filbrun asked about such opportunities after taking what ended up being his course favorite – organic chemistry.

His first project was to perform a bioassay, or measure the concentration or potency of a substance by its effect on living cells or tissues, on a series of compounds for antibacterial activity. During the fall semester, he began his current project, synthesizing new organic compounds as candidates for being anti-cancer agents.

“It’s almost surreal,” Filbrun said. “It was an interesting experience, a mind-opening experience, to say that I created a new molecule that had never been seen before. I thought that was great.”

Hossain said that when Filbrun completes the synthesis, all compounds will be sent to the University of Saskatchewan in Canada for biological evaluation.

“Ross has the ideal set of skills that we would want for any student,” Hossain said. “He is a very hardworking and dedicated student who is always eager to gain all possible practical experience. He is a careful and creative thinker, with an eye for detail and a dedication to logic.

Filbrun noted that his interest in medicine began in an unlikely place – under the hood of a car.

“I was very interested in working on cars and doing mechanical work,” he said, especially after talking about the medical field with a doctor and starting to draw correlations between mechanical work and surgery. The opportunity to observe a surgeon confirmed to him that medicine was his future.

After being homeschooled for high school, he had taken time off to work, but knew after two years of building that he wanted to go to college. Filbrun started out at Ivy Tech Community College to gain experience and confidence, before transferring to IU Kokomo.

In addition to being a research assistant, he participated in the STEPS program, which the campus offers in conjunction with the North Central Indiana Health Education Center. It offers interview exercises, preparation for admission to professional programs such as medical, dental and veterinary schools, as well as help in studying for entrance exams.

His experiences on campus prepared him both academically and personally for the challenge ahead.

“Medical school, and then medical practice after that, is not just about classes,” he said. “Development as a person is a very important aspect of life. I have grown a lot in the last two years. Just having experience with many different people, having a better understanding of them and being able to learn from their experience, is valuable. Everyone has a different outlook on life, and it’s important to understand their perspective. This is something that IU Kokomo helped me with.