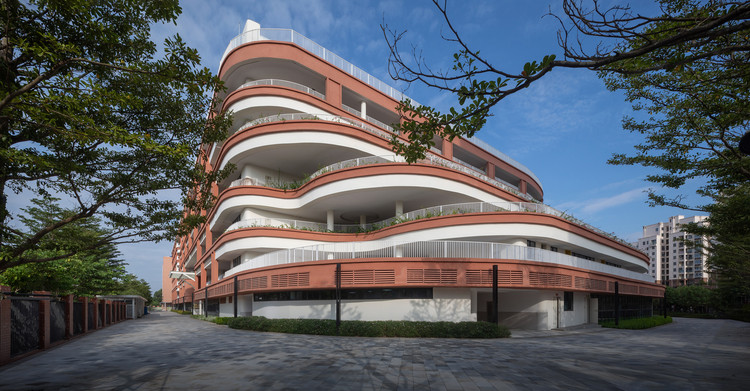 Text description provided by the architects. Background
This is a low cost reconstruction and expansion project of the old campus. Due to the lack of land, the school must build a new high school on the original campus playground to fill the 1,500 degree gaps.

Embrace the old campus
Facing the old campus, the new campus did not continue the traditional fishbone arrangement of the teaching blocks; instead, it used empty space and adopted a large speaker layout to form an embrace between the old and the new, creating an open, three-dimensional, and flowing campus space.

Fluid platforms
The adjustment of the large flat layer maximizes the demands of the future flexibility of the school. It can be set based on a grade for each level, or it can be flexibly set based on the class changing system. Class units are like pebbles, placed on a large, fluid platform.

Three-dimensional play areas
The wide, continuous outdoor platform encourages kids to come out more of the classroom during break time, free to run, play, communicate, and even exercise. The total area of â€‹â€‹the three-story Heavenly Platform with a depth of 9m is equivalent to that of two 300-meter playgrounds, adding valuable outdoor activity space to the overcrowded campus.

Sunshade and rain canopy
Each level has its own playing field between the classes. The horizontal and continuous green plants on the platform are connected to the city and also increase the green vision of the campus. Each platform has a 3 meter cantilever, which provides continuous space shading for students in the subtropical climate of Shenzhen.

Unnamed spaces
There are many flexible transition spaces between classroom modules, which have become student favorite unnamed spaces, sometimes as small galleries, sometimes as play nooks, and sometimes just for kids to avoid the view of the classroom. ‘teacher. It brings unlimited imagination to children and also leaves each child with their own memories.

A large courtyard full of lights
There are three vertical light holes surrounding the large courtyard, deep underground to provide natural light and ventilation for the library, gymnasium and activity room, and at the same time mitigate the impact of large-scale buildings. on the campus environment. In the evening, the caves turn bright and play with light and shade, making the campus a cozy little town to inspire more public events on campus.