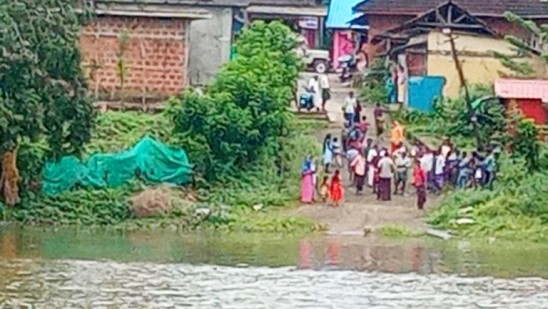 
Pulppalli : Mullankolli panchayat students found themselves stranded by the river, unable to join the school admission party on Monday. The disappointing episode occurred in the Karnataka border village of Bairakuppa located on the banks of the Kabani River. The students there were eagerly waiting to be rowed to the other side, to attend the admission party commemorating their first day at school. after a long gap driven by the pandemic, and although the service boat Bairakuppa reached the coast, the Karnataka authorities blocked the restart of the service.

The students and tutors reached the boat point early at 9 a.m. Across the river at Mullankolli panchayat, PTA and staff were waiting to receive them all at Perkaloor Thonikadavu School. On the instructions of the district administration, the boat was dispatched on time to the Bairakuppa pier. However, the police blocked the resumption of service there and the students returned home disappointed.

For decades, students and villagers of Bairakuppa have relied on Pullpally of Mullankoli for their needs. With the onset of the pandemic, the government of Karnataka blocked all entry routes into the state except the highway, and also made RT-PCR testing mandatory. This is the circumstance which led to the students being prevented from sailing ashore. If the Karnataka authorities do not change the rules, several students in Bairakuppa will remain cut off from the school.